Diana Nyad frequently denigrates and dishonors other women athletes. She ignores them, demeans them, and steals their accomplishments.

Diana Nyad at her press conference in Key West on September 3, 2013, the day after she crossed from Cuba to Florida. From “Swimmer Diana Nyad’s success story inspires aging boomers” via the Spokesman-Review of Spokane, Washington (AP Photo/J Pat Carter).

“As a sports journalist and a feminist all my life, I take both joy and pride in honoring all great women athletes of all eras.”

Diana Nyad takes neither joy nor pride in honoring anyone but Diana Nyad. Her lust for admiration steals attention from many swimmers who genuinely deserve acclaim. On the rare occasions she mentions other female swimmers, she usually uses them as fuel for the fire of her own glorification.

Nyad employs at least three strategies for aggrandizing herself at the expense of other female athletes. Below are examples from each of her three methods:

“I was walking down the pool deck at the Olympic trials, and this was going to be it.”

When Nyad lies about qualifying for the 1968 Women’s Olympic Trials, she dishonors all of the actual qualifiers. Among the women Nyad ignores:

The U.S. women swimmers went on to dominate the Mexico City Olympics. They won 11 out of 14 events and 26 of 42 medals. Nyad never mentions the name of anyone on that team.

Nor, of course, will you hear her name the swimmer who really placed 6th in the 100 back at the trials: Laura Novak, the 14-year-old from Dearborn, Michigan, who held her own against some of the greatest athletes in the world.

I remember it like it was yesterday. . . .  I looked up at the electronic scoreboard and I was sixth. I didn’t go to Mexico City after all that.

Diana Nyad, “The Courage to Succeed”

Four years later: A trio of Dearborn High School students qualified for the 1972 Olympic Trials. Laura Novak earned spots in three events: the 100 back, 200 back, and 100 butterfly. Tom Szuba qualified in the 200 back and the 400 IM, Paul Foster in both the 100 and 200 back. Of the three swimmers, only Szuba reached the finals, finishing 6th in the 400 IM. The ’72 trials would be the last meet of Laura Novak’s swimming career.

“Before Cuba, way back in 1975, the swim that made my heart race was Manhattan. I was the first woman to circle the island. . . . What a memory!”

Diana Nyad knows that six women swam around Manhattan Island before she did. She could use her prominence to help bring those six women the respect and acclaim they deserve. Instead, she tries to erase them from history:

“I became, in the 1970s, the best ocean swimmer in the world. I held all the major records on planet Earth, out in the open sea.”

Diana Nyad never came close to being the best ocean swimmer of the 1970s. At least twelve great marathon swimmers did, and five of them are women. (Please see “Best of the Seventies” for details.)

Nyad ignores all of these women, minimizing their accomplishments and stealing the recognition they deserve.

Diana Nyad, “The Courage To Succeed”

When Nyad was 16, four teenagers from three countries held all the backstroke world records and U.S. national titles: Judy Humbarger of the United States, Elaine Tanner of Canada, and Karen Muir and Ann Fairlie, both of South Africa. Diana Nyad never mentions their names.

For details, please see “A National Title & A World Record.”

The accomplishments of Palfrey and McCardel dwarf Nyad’s. So she feigns respect while doing whatever she can to debase them. “You know, the two greatest distance swimmers on the planet today, along with me,” she declared in a 2017 interview, “are two Australian women. . . . I bow down in front of the two of them.” (Neuronfire podcast, 6:05).

Then Nyad brings up their Cuba-Florida attempts:

“Well, you know, never to denigrate any of the great swimmers—male, female, young, strong—who have tried this what we call the Mount Everest of the earth’s oceans. Of course, they are people of fortitude. But why did none of them come back a second time?”

You know, like Diana did. She neglects to mention her no return policy on the English Channel. Never to denigrate, of course.

Nyad also leaves out the part about Penny Palfrey completing four of the five major swims on planet earth—swims Nyad wouldn’t dare attempt after her Dover Strait debacles. Palfrey completed the Cook Strait once, the English and Catalina Channels twice each, and the Strait of Gibraltar three times. One of Palfrey’s three Manhattan swims was 40 minutes faster than Nyad’s. And Palfrey completed a legitimate 40-hour swim, along with other feats too numerous to list.

Nor does Nyad deign to mention that Chloë McCardel swam Manhattan once, Catalina once, the English Channel 37 times (as of October 17, 2020), and a legitimate 41-hour swim. (Update: On October 13, 2021, McCardel completed her 44th crossing, putting her one ahead of Allison Streeter, the previous record-holder for most crossings ever, man or woman.)

“Sandra Bucha has beaten me a couple of times in individual swims. I’ve been beaten by Corrie Dixon. They were better than me on those days.”

When Nyad went head-to-head against Bucha, Nyad lost to her by an average of one hour and twenty minutes per race. The closest Nyad came was 31 minutes. She once lost to Bucha by over three hours.

When Nyad won the 1974 world championship on points, she learned that Sandra Bucha’s parents weren’t happy. In an unctuous attempt to assuage their displeasure, Nyad wrote them a letter in which she brags (“ . . . in 1970 and 1971 I was by far the best female marathoner that the sport had then encountered”—she wasn’t), then whines (“I thought the point system was unfair and felt cheated”), then finally gets around to acknowledging their daughter’s superiority:

“At the close of the 1974 season there is absolutely no professional swimmer or anyone knowledgeable about the sport who can deny that Sandy Bucha is the best female to date.”

That part was true. But the thought of denying Sandra Bucha’s dominance would cross the mind of no one but Nyad. I suspect she didn’t win over the Buchas.

As for Corrie Dixon, Nyad beat her once. So it would be more accurate for Diana to say: “with one exception, they were always better than me.”

Above: Corrie Dixon-Ebbelaar after being named World Champion of 1973. Above right: the certificate for Ebbelaar’s record-breaking 1971 English Channel crossing.

“No matter the sport I was covering or the show I was doing, I am always, always concerned with civil rights, human rights, women’s rights. I am a feminist, and I live that reality every day.”

The great Dutch swimmer earned six world championships to Diana Nyad’s one.* She’s in the International Swimming Hall of Fame, an honor that continues to elude Diana. And she’s a beloved icon in her native country.

Nyad never mentions de Nijs without mocking and denigrating her.

*In a 1978 press release, Nyad claims that she won the title five times. In fact, she won it once, in 1974, on points. Sandra Bucha trounced her every time they raced that season, but Nyad entered more events. See “When is a world champion not a world champion” and Canadian race totals for 1974.

The two met in competition for the first time in Hamilton, Ontario, in 1970. Nyad had a great swim, completing the 10-mile course in record time: 4 hours and 23 minutes, 12 minutes faster than the veteran de Nijs.

But that 12-minute victory has never been enough for Nyad. She has taken those 12 minutes and raised them into years of gloating.

She begins every account of the race by mocking de Nijs’ appearance: “She looked a little more like a linebacker for the Chicago Bears than she did a swimmer” (“The Courage to Succeed”). Then she segues to height and weight:

“I will tell you,” concludes Nyad, “that the beach actually did tremble with each thud of her legs.” (Find a Way, p. 59).

Here’s what Nyad won’t tell you: that she (Nyad) came to Hamilton rested and fresh—the Lake Ontario 10-miler would be the first and only event she completed that summer. Meanwhile, de Nijs, seven years Nyad’s senior, won two events in the month leading up to Hamilton—a 12.5-mile race in Holland and the 20-mile Capri-Napoli contest in Italy—and would compete one more time before the end of the season.

But Nyad can’t tell the truth about Judith de Nijs because that would reveal the truth about Diana Nyad. So to build herself up, she has to tear down de Nijs. And the more Nyad does that, the stronger she feels: “Better than being first woman,” she exults about the Hamilton race, was that “I beat Judith that day (she never swam again). . . . So, you know, you don’t want to kick someone out of the sport altogether, but it is an empowering feeling.” (21:14)

But Nyad did want to kick someone out of the sport. We know this because she wouldn’t have lied about it otherwise. Judith de Nijs did not stop swimming after Hamilton. The next week, she won the 19-mile race at Roberval, Québec. She took the following season off to have a baby, then began racing again in 1972. She didn’t stop until at least 41 years later, when she became the 2013 Dutch open water champion in the women’s 70+ age-group. 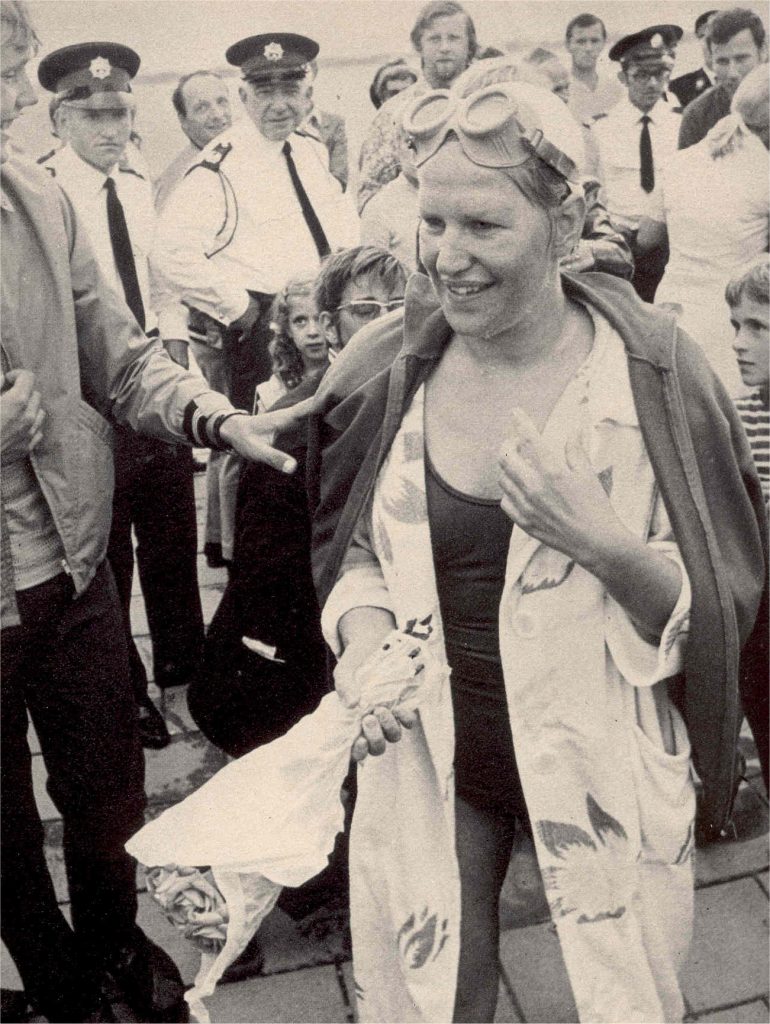 Above: Judith de Nijs at an unidentified event sometime in the 1960s or early 1970s. Copyright unknown, via mastersprint.nl.

Below: Detail from Open Water Boek 2015, p. 69. Produced by the Royal Netherland Swimming Association (KNZB), edited by (and with thanks to) Richard Broer. Image cropped and condensed.

#3: For Unclaimable and Unstealable Accomplishments, Devalue the Achievement and All Who Achieved It

The English and Catalina Channels

When Nyad needs to denigrate in bulk, she minimizes entire swims—in particular, swims she either couldn’t finish or never attempted—thus belittling the accomplishments of everyone who has ever tried or completed those swims.

Nyad failed in three attempts to swim the English Channel. In at least one of them, she got lucky and had excellent conditions. But she suffered catastrophic metal fatigue of her steel-trap mind and gave up. Before her English Channel failures, Nyad said that those who succeeded in the Channel had “the heart, the guts, and the courage” to do so. After her failures, she decided that success in the Dover Strait depended entirely on luck.

The resulting fusillade of sour grapes demeaned—and continues to demean—everyone who has ever completed the world’s iconic marathon swim, especially those who succeeded on or around Nyad’s 1976 failures:

The following summer, Nicholas returned to England, swam to France, waited a few minutes, and then swam back, making herself the first woman to complete a two-way crossing. You will never, of course, hear Diana Nyad mention her name. 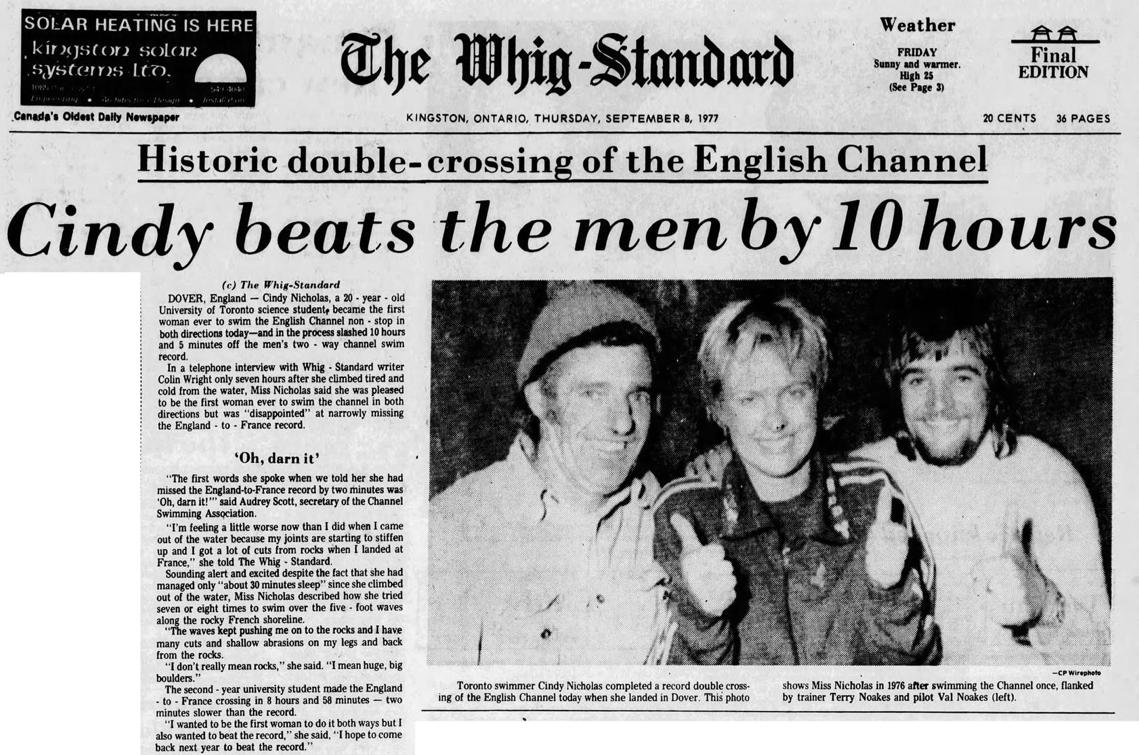 Nyad’s pantheon, though, has room for only one at the top, so Ederle had to go:

[I]f I get to the Florida coast, that will be one of the most historic moments in sports. I am not going to compare it to Lindbergh, but it is certainly going to be bigger than Gertrude Ederle finishing the English Channel. (New Times, 26 June 1978)

But it doesn’t get any bigger than the 21-year-old Ederle crossing the Channel hours faster than the fastest man at a time when most women didn’t know how to swim.

What’s more, we can be confident that, in every race and every crossing, all of the athletes above—except Nyad—swam the entire way under their own power, from shore to shore, in a squeaky clean fashion.

In Nyad’s case, we know nothing of the sort. And I mean that with all due respect.