Winning an Olympic medal was Diana Nyad’s first Xtreme Dream, but she was never fast enough to qualify for the Olympic Trials. That hasn’t stopped her, though, from claiming that she did.

“I remember it like it was yesterday. . . . I looked up at the electronic scoreboard and I was sixth. I didn’t go to Mexico City after all that.”

“The Courage To Succeed,”
a presentation to the American Railway and Bridge and Building Association,
Sep 1997

The citation above and the videos on the right cover only occasions when someone recorded Nyad’s trials tale. There must have been many other events where her fabrications went undocumented. Attendees at some of those events have filled in a few of the blanks. Please see the “Further Reading and Watching” section for some examples.

With five meters to go in the 100 backstroke final of the 1968 Olympic Trials, Kaye Hall of Tacoma, Washington, is well ahead, but less than two seconds separate the remaining seven swimmers. Only the top three finishers earn a trip to Mexico City.

Among the seven trailing Hall is 14-year-old Laura Novak of Dearborn, Michigan. Novak won a state championship at 12. Two years later, she finds herself going head-to-head against some of the greatest athletes in the world. The three officials in her lane lean in with their stopwatches as Novak windmills her last stroke and stretches for the wall.

Her coach gives her the bad news a few minutes later: sixth place. 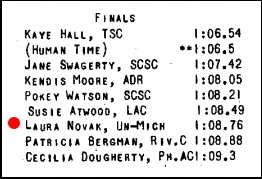 Above: Results of the 100-meter backstroke final at the 1968 U.S. Women’s Olympic Trials. Winner Kaye Hall of Tacoma, Washington, went on to set a world record in Mexico City. (Images via USA Swimming.)

In 1968, instantaneous results via touchpads and electronic scoring were new, costly, and rare. The men’s trials had them. The women’s did not. Diana Nyad didn’t know that, though, because she wasn’t at the women’s trials. She didn’t qualify for the Olympic Trials in 1968 or any other year.

On the right are the results from the 100 backstroke heats at the 1968 trials. You’ll find Laura Novak in heat four. You won’t find Diana Nyad anywhere.

Could Someone Have Accidentally Left Nyad Off the Results?

No. Had Nyad competed, she would have known about the scoreboard.

She also would have known that the women swam in Los Angeles, not Long Beach:

[B]y the grace of God, I made it into the final eight. The Olympic trials were at Long Beach. Eight people are going to go for the three top spots. Three people would then get to go to Mexico City . . . (“The Courage to Succeed”)

Why did she make that mistake? Because the men’s trials took place in Long Beach. The women competed at the Los Angeles Swim Stadium, a facility built for the 1932 Olympics.

By 1968, the L.A. Swim Stadium hadn’t yet upgraded to an electronic scoreboard. Electronic touchpad timing for aquatics only became available the year before.  At that time, a new Omega system would set you back about $500,000, around four million in today’s dollars. 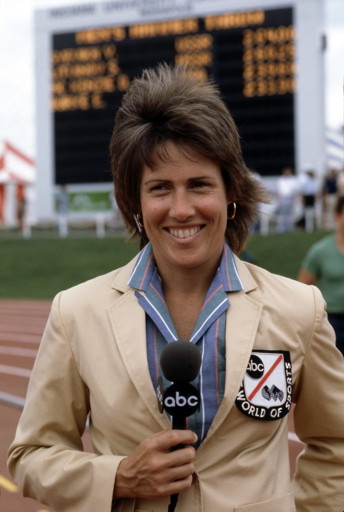 Nyad knew none of this when she began telling her trials story sometime in the 1980s or ’90s. However, as a sports commentator, she’d have seen many electronic scoreboards by then. She must have assumed that the 1968 women’s venue had one. Not to mention that waiting for results would kill the momentum of her story.

Above right: Nyad in an ABC Wide World of Sports promotional photo from 1979.

Below: Rather than an electronic scoreboard, the women’s trials had what looks like a fancy bulletin board. Screenshot from “1968 Olympics: Women’s Swimming Trials.”

When Diana Requests a Change of Venue

Despite claiming to “remember it like it was yesterday,” Nyad sometimes changes the race’s location. I’ve heard her tell her tale three different ways location-wise:

The Olympic Trials for the Mexico City Games came that August. . . . Even if the Olympics were by now a pipe dream, I didn’t want my swimming career to be over. . . . I wanted to make the trials.

It was my last 100-meter backstroke. The last hoorah, with an outside, desperate chance at the elite trials. Top three would go on to compete for a coveted spot on the Mexico City team. The other five would go on to the rest of our lives.

I am sixth. I go over to shake hands with the three girls who are moving on. (p. 50)

But no meet in which Nyad swam before the trials had an electronic scoreboard. More importantly, in qualifying for the trials, top three meant nothing. Swimmers in 1968 had to achieve a time standard, just like they do today. Once at the trials, though, “top three” meant everything. It got you a seat on the plane to Mexico City. So Nyad’s always talking about the trials, even when she’s not. 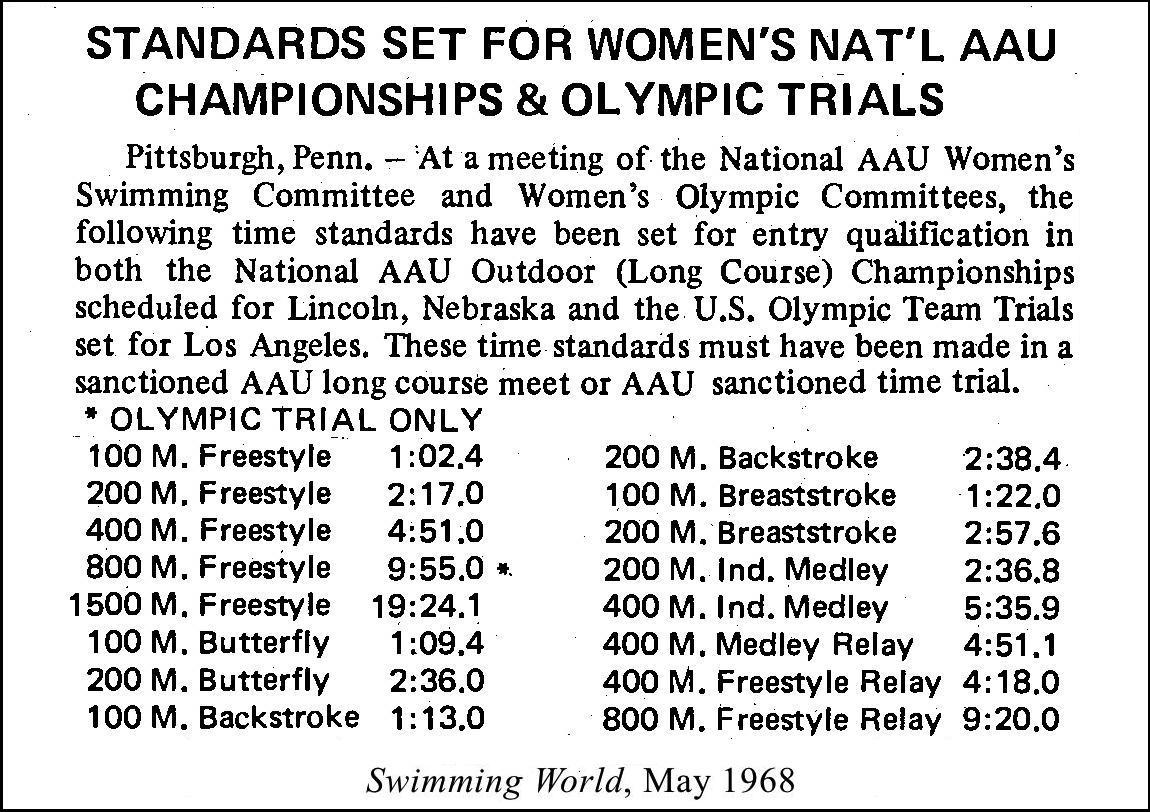 In a 1974 Military Life article, Nyad changes her story in another way, claiming to have swum the 400 IM at the trials and placed fifth. The results, however, show former world record-holder Patty Caretto taking fifth. Claudia Kolb, who went on to win the event in Mexico City, finished first in world-record time.

But Nyad never talks about any of these great athletes or their record-breaking swims. When Nyad speaks of the trials, she mentions only one name: Diana Nyad.

On the other hand, in her 1978 memoir, Other Shores, she doesn’t bring up the Olympic Trials at all. Had Nyad been there, she would have said something.

So How About Those Men?

Two days after the women finished in Los Angeles, the men’s event began about 25 miles down the freeway in Long Beach. The city’s new Belmont Plaza Pool had opened just two weeks earlier with a celebration, the program for which boasts that Belmont’s “Electronic scoring and timing equipment is [the] most modern available.” If Nyad saw photos of the men’s trials or watched it on television, she would have seen the facility’s state-of-the-art electronics and probably assumed that the women had the same.

But you know what assuming does: It makes you think that everyone swam in Long Beach and had an electronic scoreboard. 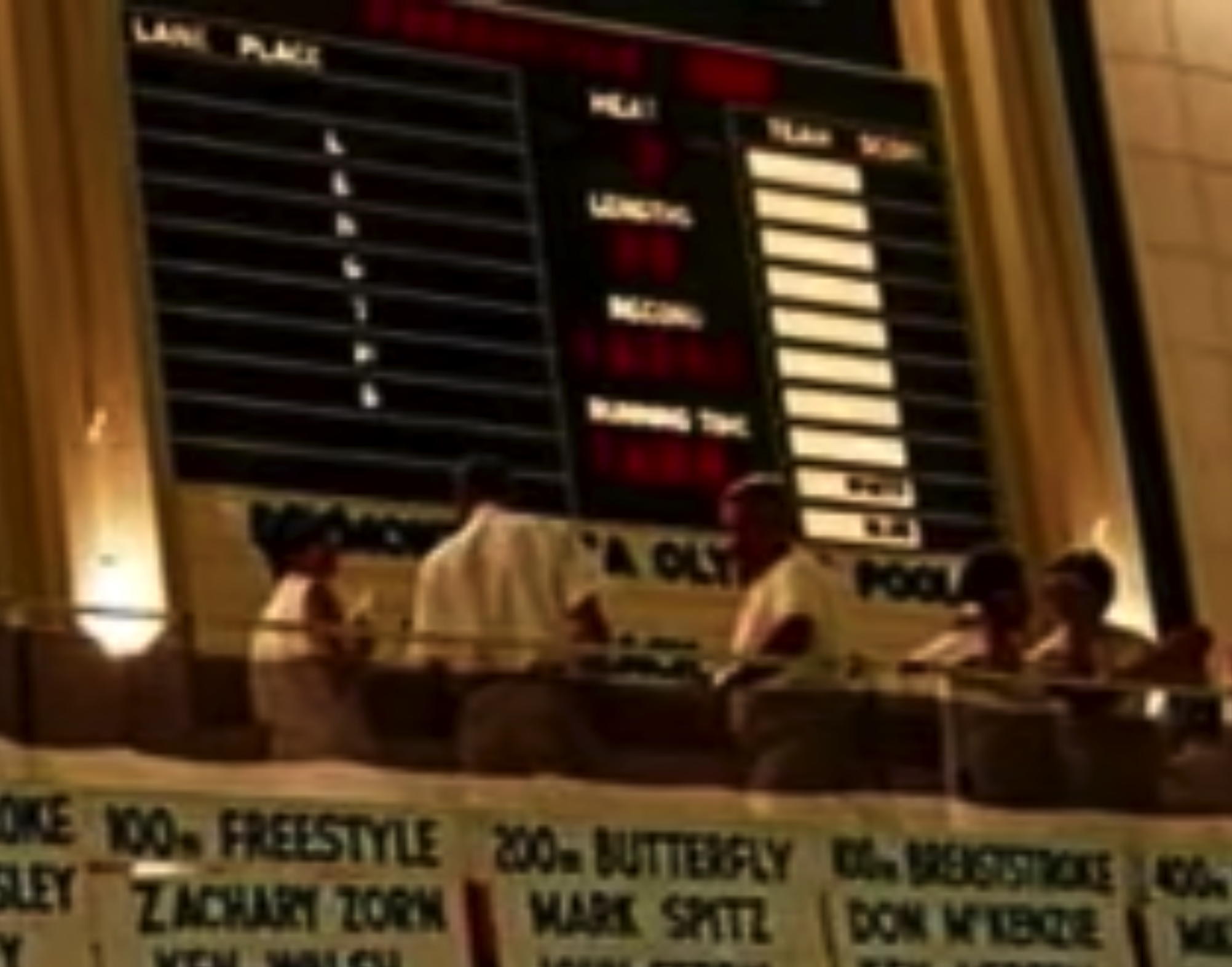 Screenshot of the scoreboard at Belmont Plaza (via “1968 Olympics: Men’s Swimming Trials.”)

I am grateful to the many people who contributed to this entry. In particular, I am immensely thankful to one 1968 Olympic Trials competitor whose input regarding the event—and regarding timing systems—enriched this page beyond measure, electronic or otherwise.

Here’s what attendees at Nyad’s events learned about her Olympic Trials experience:

Amanda Hammon writing in the Nevada Appeal about a Carson City Library talk in 2002:

[Nyad:] “When the last day comes, I want to close my eyes and clench my fists like I did (at the Olympic trials) and say I didn’t always win. I didn’t always accomplish what I wanted, but I couldn’t have done it a fingernail better,” Nyad said.

Brittany Breaux writing in her Fit Formula blog about an unnamed 2014 event:

In case you’re not familiar with her story, Diana was a competitive swimmer at a young age and went all the way to the Olympic trials for backstroke.

This writeup of a 2017 Target corporate event:

Later, at the 1968 Olympic trials, Diana didn’t end up making the team.

The [“not a fingernail better”] line comes from a pep talk one of her teammates gave her when she was competing in the Olympic trials. . . .  She came in sixth. Her Olympic dream was over. (2018)

“Denigrating Women”—more about some of the great Olympic Trials swimmers whom Nyad ignores. 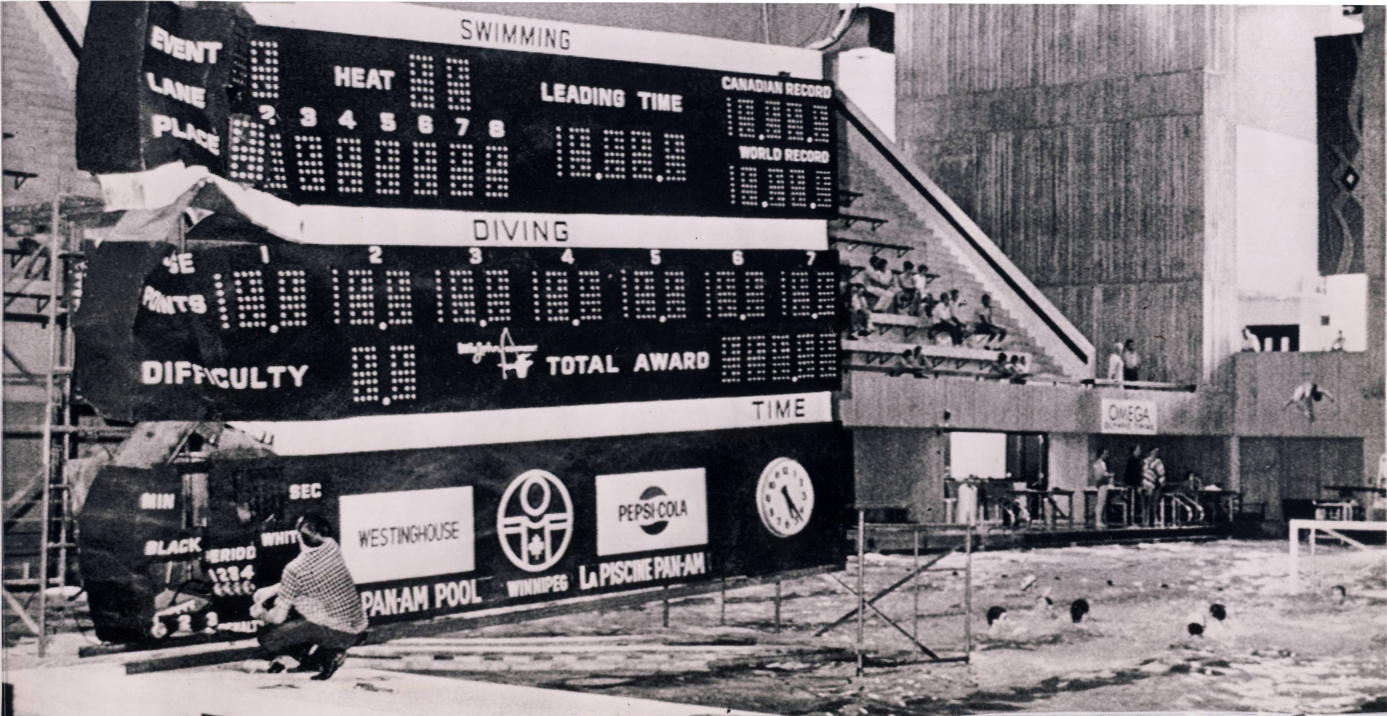 Above: Associated Press photo of damaged scoreboard at 1967 Pan American Games in Winnipeg. The same image appears in the Wisconsin State Journal. The Miami Herald published a different view (with Nyad coincidentally on the same page).